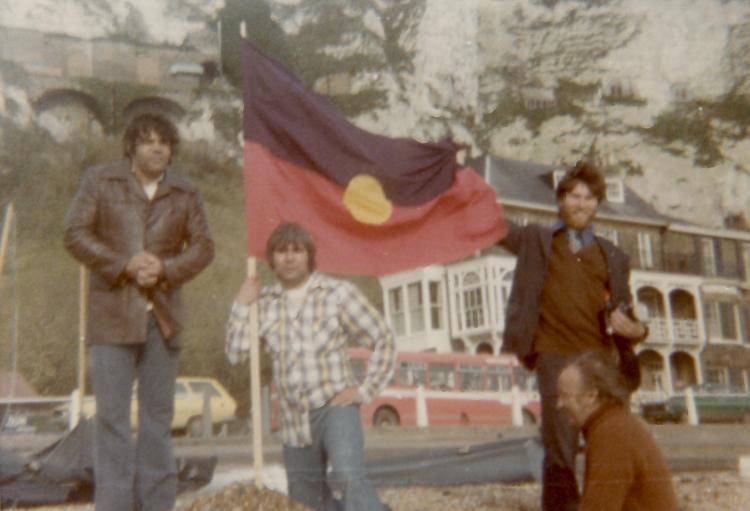 Join us at 12 noon on July 9th to commemorate the raising of the Aboriginal flag on Dover Beach during a free public event.  Beach meeting location here.

On 2nd November 1976, two Aboriginal men landed on Dover beach, and planted the Aboriginal flag, symbolically claiming the land for Indigenous Australians "by virtue of possession". One of them was the famous activist Paul Coe. In 2022, commissioned by Border Crossings’ ORIGINS Festival, Paul’s daughter Jasmine is designing a plaque to be installed permanently on Dover beach as a memorial to these events. The plaque will be unveiled by the artist on July 9th, and there will be wraparound activity, including an online discussion with Paul and Jasmine Coe.

Jasmine Coe is a Wiradjuri-British artist who studied Fine Art in England graduating in 2014 with her work exploring Portraiture. In late 2016, she travelled to Australia for the first time to connect to her Aboriginal heritage and to meet her Father Paul Coe after 20 years apart. Having struggled with race and self-identity growing up, her work now focuses on harmonising internal conflicts that arise from having two lines of heritage which together hold a traumatic history. In an attempt to heal self, painting becomes a restorative process where by the understanding of self-identity is given space to develop, while at the same time the work continues to celebrate the beauty of the natural world. Jasmine is also involved in the creation of a new gallery in Bristol, as a home for Indigenous art.

Part of the UK/Australia Season.